Judith Brink, a committee member of The Friends of Radloff Park (FORP), digs deep into the unwelcome presence of the borer beetle, which has made its appearance at the park, and in greater Somerset West.

The polyphagous shot-hole borer beetle (Euwallacea whitfordiodendrus)(PSHB) and its accompanying fungus (Fusarium euwallaceae) has been causing devastation to trees in South African cities in the past few years.

Euwallacea whitfordiodendrus (PSHB) belongs to large group of fungus-feeding beetles called the Ambrosia beetles. It is included in a sub-group of beetles that preferentially attacks living trees.

While the beetles do bore into tree trunks, they feed off a fungus (Fusarium euwallaceae) which they carry with them.

The fungus develops inside the borings, and it is the fungus that can kill trees by eventually blocking the xylem vessels, thus the trees can not transport water or food between the leaves and the roots.

This causes die-back of branches, and potentially the whole tree.

In an attempt to protect and save the trees in Radloff Park, FORP along with the City of Cape Town, Recreation and Parks Department will be treating the infected trees. FORP will also be erecting an energy tower to help disrupt the beetle.

The main focus will, however, be on firstly trying to control the Fusarium fungus infecting the trees, with a fungicide, and secondly feeding and watering the trees.

The application of the fungicide will be done by backpack sprayer individually to each tree. These applications will take place 11 times over the coming year.

The fungicide that will be used has been developed to control this Fusarium fungus. This fungicide is a Blue label product, meaning that it requires caution to use, but is not poisonous to the operator, people, or animals in the area.

To give the trees a boost, we will be applying a liquid fertiliser as a soil drench around the trees. We have been most fortunate in that First Ocean; a local producer of marine-based liquid fertiliser, has donated 25 litres of fertiliser to start the process.

The fertiliser applications will take place every two weeks throughout the growing season. In addition to this the trees that are located far away from the river will need to be watered during their growing season.

These actions are going to be costly in terms of the products needed, and the manpower to apply them. FORP is in discussion with the CoCT regarding the costs, and expect to hear from them in this week.

We expect that the City will be helping with the manpower (labour cost), but possibly not with the cost of the fungicide and the fertiliser. FORP will need to raise about R30 000 to cover the costs, and a dedicated bank account is being opened for the purpose of receiving donations towards the treatment of the trees in Radloff Park.

These are the trees that will be receiving treatments. All the trees in the park are still being monitored and there may well be new trees added to this list.

Currently most of the infected trees are old English Oak trees. The other infected trees in Radloff Park are willows, weeping boerbean (Schotia brachypetala), a plane tree (Platanus) and a poplar tree.

More and more species of trees are being added to the list of trees being attacked by the PSHB and the fusarium fungus.

Below is a list of the reproductive host* species, and the main exotic species that are being attacked are the following:

The indigenous species that are being attacked are:

Non-reproductive host trees are those that are attacked, but the beetles do not establish breeding galleries. The fungus may or may not cause disease. Trees are generally not expected to die.

Currently the worst of the infestations in Somerset West seem to be in the Boxelder (Acer negundo) trees.

The team from Nature Conservation who are identifying and removing badly infected are now focusing on the removal of the boxelders.

Should you be concerned about any trees in your property or in your street, please contact the City of Cape Town via the Cape Town Invasives website at capetowninvasives.org.za/pshb-form, and complete the form.

The team from Nature Conservation will then contact you to come to inspect your trees. 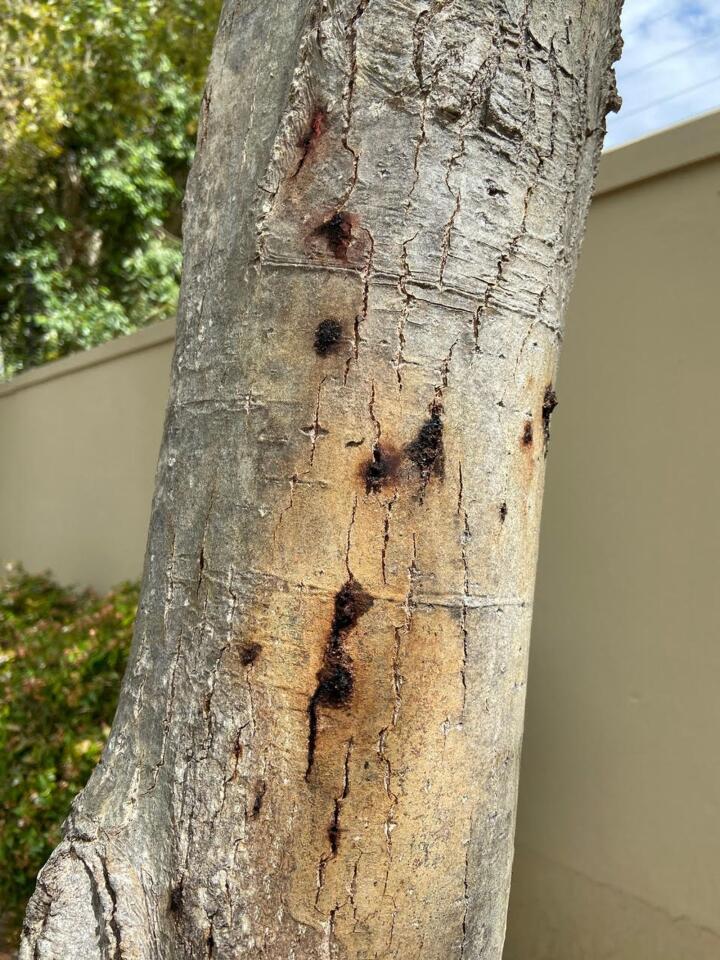 1/5: Sap excreted from a tree suffering from an infestation of beetles. 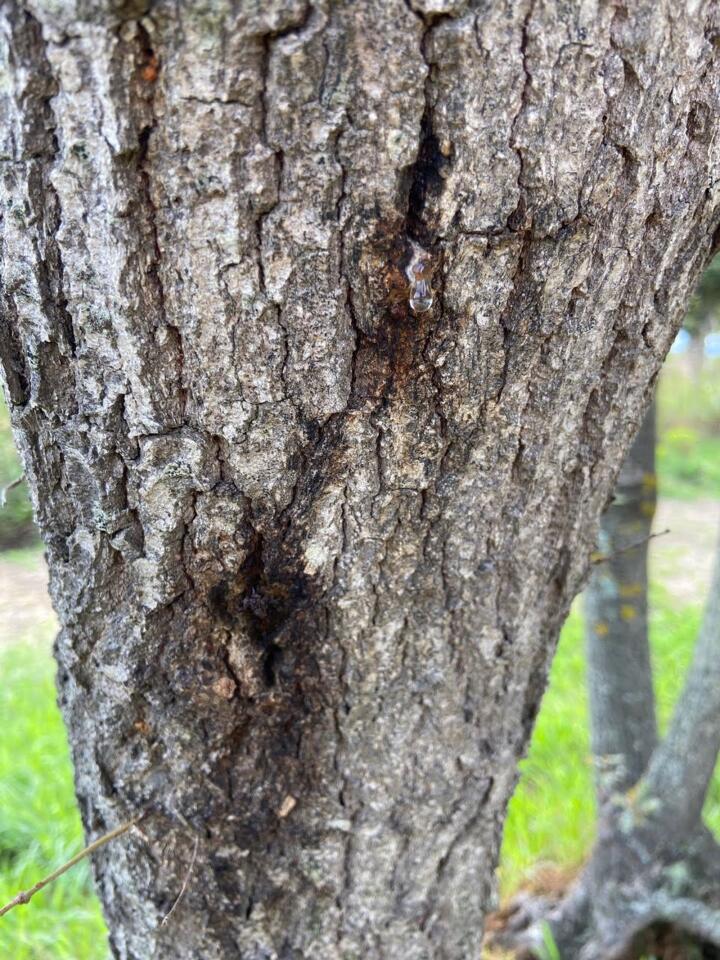 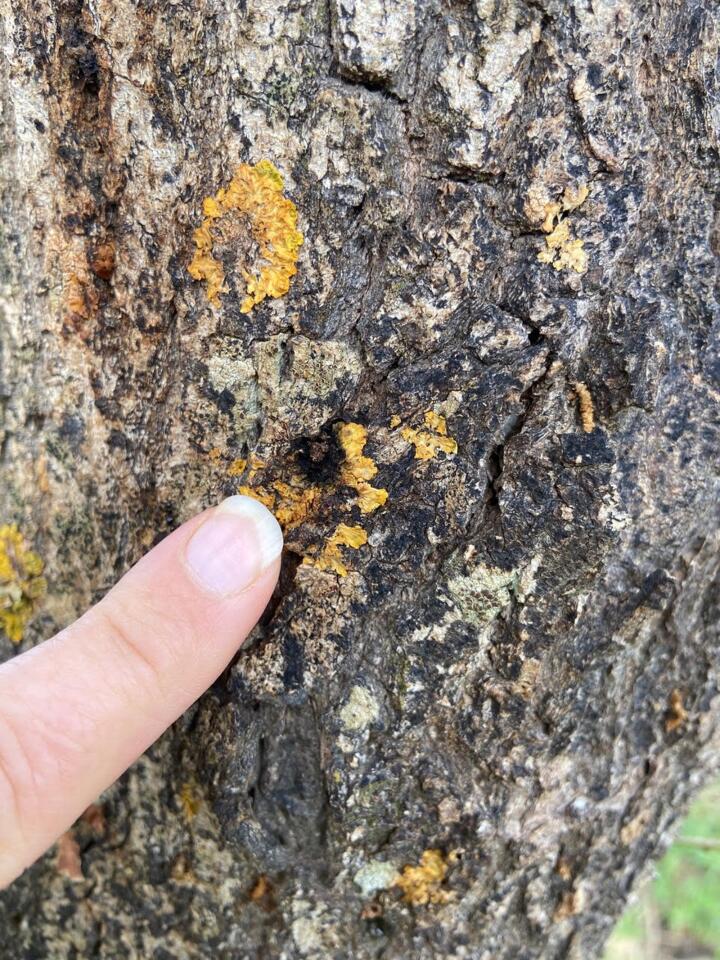 3/5: The author points to one of the tell-tale holes. 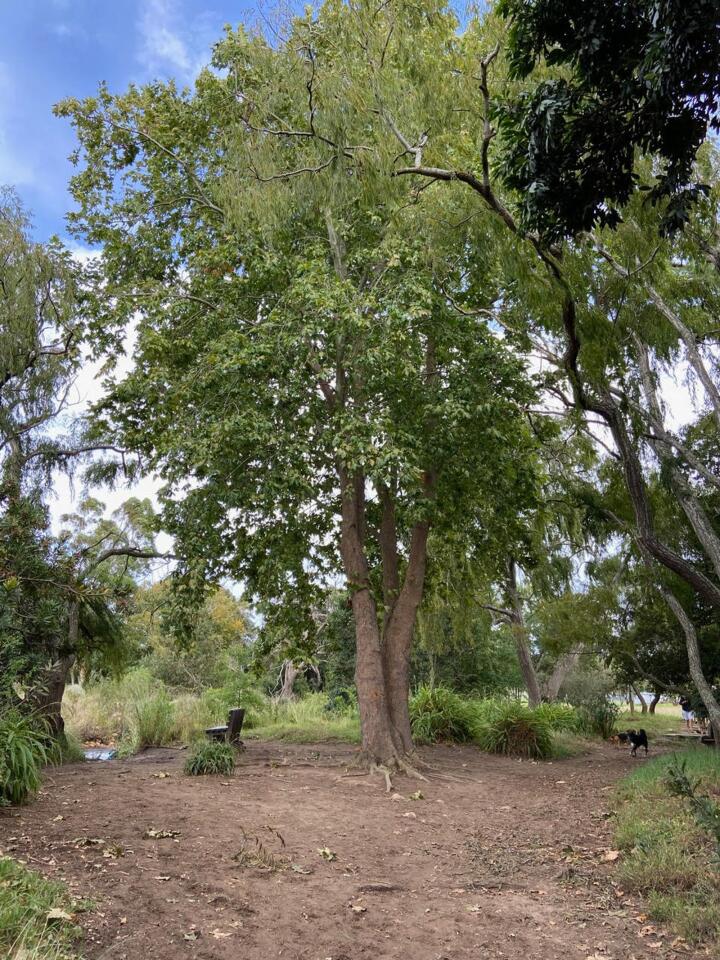 4/5: A large American Plane tree at the side of the Lourens River, at Radloff Park. 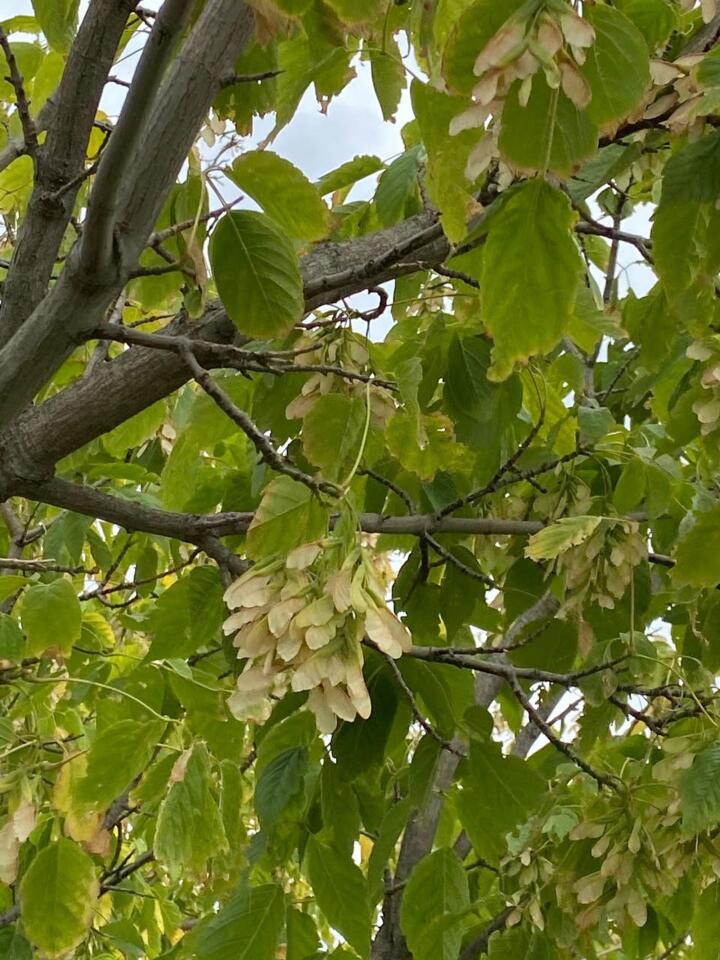 5/5: The foliage of fruit of a Box Elder, one of the many trees in Somerset West to be infected by the borer beetle.