Pollution can wreck havoc on coastlines, not only on the natural environment and ocean ecosystems, but the threat it can pose to the lives of various sea species.

One way of eliminating this toxic pollution from making its way into oceans is by reducing the rubbish on beaches, and beach clean-ups have become a popular way of doing this.

In and around Cape Town’s beaches, these clean-ups have become a common sight, with environmental activists and volunteers all joining in to work towards a common goal: reducing pollution on coastlines.

A local group formed in the Helderberg has joined their efforts to this cause, and is fully committed to making a noticeable difference through their beach clean-ups and other projects currently run to help tackle this major environmental problem.

The Helderberg Ocean Awareness Movement (HOAM), founded two and a half years ago by Lisa Starr, has been organising numerous clean-up sessions on Strand Beach since its inception.

HOAM was formed after Ms Starr had read a Facebook post expressing concern about pollution on the beach.

“I have always picked up what I see on the floor as that is how I was raised. When I was younger my mom would literally pull over the car if she saw a litter bug and make them pick it up. So, it was something which I have always done, but at times I have felt like the only one doing it.

The passionate reaction of the other people on the post motivated Ms Starr to take further action. She arranged a meeting with various role players and community members, and that was the start of HOAM.

Currently the group is consistently doing these clean-ups in Strand.

“Most of the clean-up’s happen monthly where the public are invited to join, but I’m also hosting educational clean-ups for local schools. So, now there are about three to four clean-ups happening a month; but the dream is for everyone to just do a little bit daily as that will have a bigger impact,” she says.

Ms Starr expresses her delight in how public interest and participation grows more with each event.

“The Future Kids that we collaborate with have a great following and lot’s of regular attendees, and they are a great bunch who work really hard at every clean-up. I recommend that you get your child involved in their monthly clean-up’s, and you will find them on Facebook,” she says, encouraging parents to get more children to participate.

She adds: “The clean-ups are needed to bring the community together, and create awareness about the fact that litter is below, us yet not beneath us.”

Past efforts ending in refuse bags filled with rubbish have been indicative of a need for these clean-up efforts. Some of the most common rubbish items picked up on Strand Beach by the volunteers, she says, include cigarette butts, lolly pop sticks, bottle tops, small, sweet wrappers, broken down polystyrene, plastic ear buds, and plastic bags of all sizes.

Ms Starr says the most damaging pieces of litter they find on the beach are the microplastics, which are consumed by marine animals, but she says due to their microscopic size, these pose a challenge to be picked up. Another waste item with devastating consequences are the pieces of polystyrene.

“I ask people to please refrain from bringing it to the beach at all; in fact, polystyrene needs avoiding as much as possible. If the wind catches it, you have no chance of retrieving it and its not widely recycled yet,” she warns.

HOAM has furthermore expanded their clean-up project to include educational projects and campaigns.They visit schools, do educational presentations and upload a great amount of educational information on their Facebook page, and something extra special forms part of the clean-up efforts.

“From the beginning we have had the wonderful Ben Greyling on board with his drone and he takes footage, then edits it with music which is then put onto You Tube and this is also a memory for the school kids who came to the beach clean,” she elaborates on this unique addition.

“Please be the change and pick up what you see wherever and whenever as by doing so you are a part of the solution,” she requests the public.

“From the start it has been my belief that if everyone does a little bit ever day, then there will be no need for big clean-ups,” she adds.

Through HOAM’s collaborations with different organisations such as The Fire and Flow Studio and Drumba Rhythm for Life, the clean-ups have now evolved into “Fire Jam and beach clean-ups” – which are fun sociable events with fire dancers performing to the drum beats of Bevil Spence from Drumba Rhythm for Life.

The public is invited to join in the efforts and come out to and participate in the next clean-up. “I also feel that once you do a clean-up you actually realise it’s really enjoyable and it’s good to leave a space in a better condition than you found it and to help nature,” says Ms Starr.

• The next scheduled clean-up will be held on Sunday April 18 at Strand Beach. Assembly point is at the Strand Sailing Club at 4.30pm. The Fire Jam and Beach clean-up will be hosted by HOAM in collaboration with Fire & Flow Studio and will be in benefit of the Halli Trust. The public is asked to bring along any pre-loved blankets, shoes, kitchenware or any other household items to be donated. Entry to the clean-up is free. 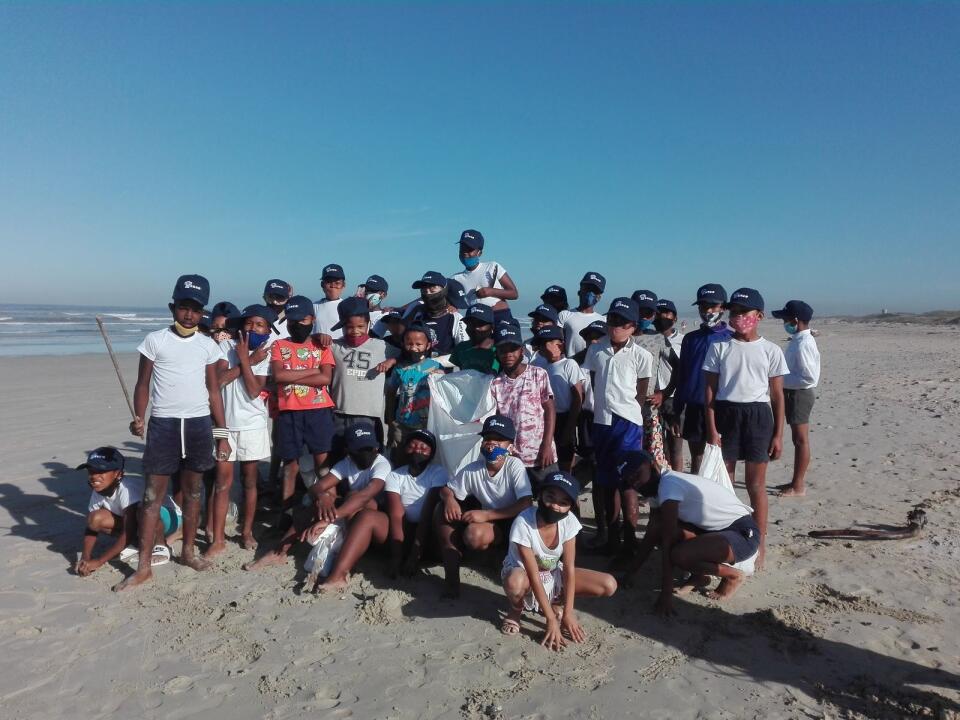 1/3: Children forming part of the Tereo-Project educational beach clean-up can here be seen on Strand Beach, during the clean-up on Wednesday April 7. 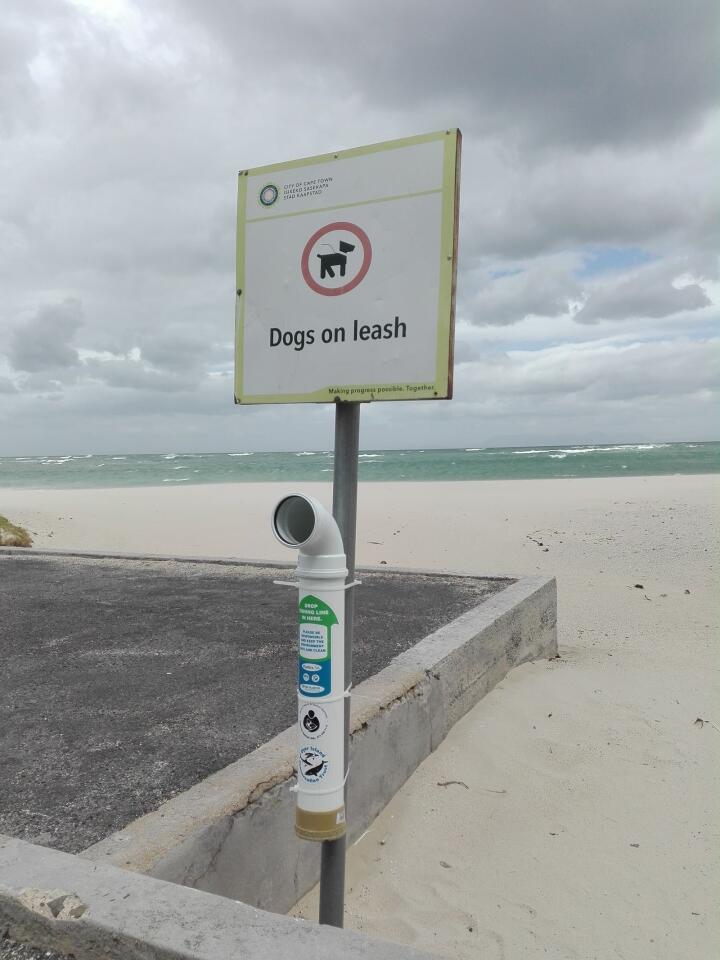 2/3: HOAM has also installed fishing line bins on the beach .Each bin has a guardian from HOAM, thanks to Plastics SA and other role players.

3/3: Without the hosting of these beach clean-ups, plastic waste, like this one on Strand Beach, will regrettably up in the ocean.